On Monday 2 December 2019, London Art Week launched the inaugural LAW Winter Symposium, to foster debate and learning among the public, international collectors, members of the art trade and museum professionals.  Held in collaboration with our partner museum, The National Gallery, the 2019 Symposium consisted of three panel discussions, with our eminent speakers exploring different aspects of collecting. 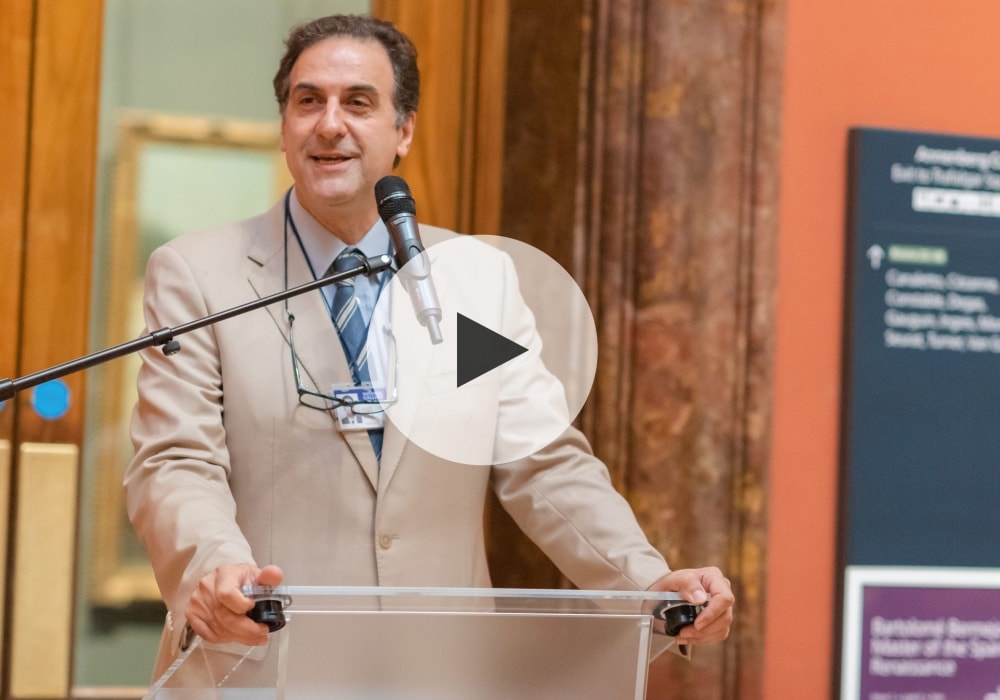 INTRODUCTION AND WELCOME BY GABRIELE FINALDI, DIRECTOR, THE NATIONAL GALLERY

2.30 - 3.15pm
RETURNING HOME: THE SIGNIFICANCE AND CHALLENGES OF EXHIBITIONS THAT REUNITE HISTORIC COLLECTIONS IN THEIR ORIGINAL SETTING

3.30 - 4.15pm
COLLECTING TODAY: WHAT MOTIVATES PRIVATE COLLECTORS AND HOW DO THEY ENVISAGE THE FUTURE OF THEIR COLLECTIONS

Toto Bergamo Rossi is an acclaimed art conservator, specializing in the restoration of stone materials. He has conserved numerous important monuments in Italy and abroad. Since 2010 he has led the Venetian Heritage Foundation, a non-profit international organization with headquarters in Venice and New York, whose mission is to increase awareness of the immense legacy of the art of Venice, throughout Italy and in those areas once part of the Republic of Venice. As director of Venetian Heritage, he has led numerous cultural initiatives, including restoration, exhibitions, publications, conferences, and research projects, all dedicated to Venetian art and culture. He has co-curated and organised the exhibition Domus Grimani in the State Museum of Palazzo Grimani in Venice, where the collection of classical sculptures has been reassembled in its original setting after four centuries.

Dr Silvia Davoli is Research Curator at Strawberry Hill House and a specialist in the history of collecting. She co-curated the exhibition Lost Treasures of Strawberry Hill. Masterpieces from the Horace Walpole Collection (Oct 2018-Feb 2019). Silvia is associate researcher at the University of Oxford.

A Rhodes Scholar, Dr Thierry Morel was educated at the universities of Paris and Oxford, where he graduated in law and history of art. He was a post-doctoral research associate at the University of Cambridge and has done extensive research on the history of art collections and art provenance in Europe. He curated the Houghton Revisited exhibition at Houghton Hall and wrote with Dr Elizaveta Renne from the Hermitage Museum, The Splendor of St. Petersburg: Art & Life in Late Imperial Palaces of Russia, a book about pre-Revolution collections in St Petersburg just published by Rizzoli.

Dr Tom Stammers is associate professor in European cultural history at the university of Durham. His first book, The Purchase of the Past: Collecting Culture in Post-Revolutionary Paris will be published by Cambridge University Press in 2020. He had published widely on the history of collecting, museums, connoisseurship, cultural heritage and the material legacies of the French Revolution and is a regular contributor to the arts magazine,  Apollo. In addition to new research on the Orléans dynasty, their politics and their collections after 1848, he is the co-investigator on the AHRC-funded project, Jewish Country Houses: Objects, Networks, People (2019-2023).

Katrin Bellinger began collecting in 1985 in parallel to her career as a dealer in Old Master drawings. Fascinated by the artistic process and the mystique surrounding it, she chose to focus on one theme: the artist at work. Since then the collection has expanded considerably and now includes over 1000 examples in a range of media - drawings, paintings, prints, photographs and sculpture - from the Renaissance to the present day. Katrin dealt in Old Master drawings for 30 years and was a partner at Colnaghi until the Gallery was sold in 2015. She is a Trustee of The National Gallery and sits on the Board of the Tate.

Dr Claudio Gulli was born in Palermo in 1987. He read History of Art at the Università degli Studi di Siena and gained his Ph.D. at the prestigious Scuola Normale Superiore in Pisa, with a thesis on the late-nineteenth century Chiaramonte Bordonaro collection (soon to be published by Officina Libraria). Between 2009 and 2011, he worked in the Paintings Department of the Louvre Museum in Paris, where his contributions to the research on Leonardo da Vinci focused on the literary popularity of the master's Saint John the Baptist (published Skira, 2009) and Saint Anne (published Officina Libraria, 2011). Since 2016 he has been curator at Palazzo Butera in Palermo, where Francesca and Massimo Valsecchi are building a new centre for the arts and culture, with their collection - currently partly on loan to the Fitzwilliam Museum in Cambridge and the Ashmolean Museum in Oxford - as the starting point.

Keir McGuinness is a management consultant who for the past 19 years has specialised in working with galleries, artists and creative businesses prior to which Keir was a company and commercial lawyer with 25 years' experience of working with retail clients. Keir is currently Chair of the Art360 Foundation, Vice-Chair of the Public Monuments and Sculpture Association, a Trustee of Chisenhale Gallery and of the Marie Louise von Motesiczky Charitable Trust. Keir's previous appointments include being Chair of Whitechapel Gallery, the Patrons of the Royal Academy Schools and of the Patrons of New Art at Tate Britain in which capacity he served as a Turner Prize juror.

Justin Raccanello is an antique dealer and graduate of the Christie's Fine Arts Course. A familiar face at TEFAF and Frieze Masters as well as London Art Week, he has also published various essays on the history of ceramics and collecting.

Dr. Gottardo studied History of Art at the University of Udine, Italy, later obtaining her MA and subsequently her PhD at The Courtauld Institute of Art. Before becoming curator of drawings at The Courtauld Gallery in 2016, Dr. Gottardo worked in the Drawings departments at the Louvre Museum, the Victoria and Albert Museum, and The J. Paul Getty Museum in Los Angeles. At Christie's, Paris, she was Head of Old Master Drawings for seven years.

Luke Syson is the fourteenth Director of the Fitzwilliam Museum. From 2012-19, he was Chairman of European Sculpture and Decorative Arts at the Metropolitan Museum of Art, New York, where he led on the complete refurbishment of the British Galleries, a $22m project, planned to open in January 2020. Luke has held curatorial positions at the British Museum, V&A and the National Gallery - where he led the successful campaign to acquire Raphael's Madonna of the Pinks for the nation and curated the highly-acclaimed exhibition, Leonardo da Vinci - Painter at the Court of Milan in 2011.

Director of the Museum of Archaeology and Anthropology, and a Fellow of Trinity College, Cambridge

Professor Nicholas Thomas FBA has written extensively on art and cross-cultural encounters in the Pacific, as well as on museum histories and futures. His books include Islanders: the Pacific in the age of empire (2010), which was awarded the Wolfson History Prize, and The Return of Curiosity: what museums are good for in the twenty-first century (2016). Director of the Museum of Archaeology and Anthropology in Cambridge since 2006, he has been a board member of the Humboldt Forum in Berlin and of the Conseil d'orientation scientifique of the Musée du quai Branly-Jacques Chirac in Paris. In 2018, he co-curated 'Oceania' for the Royal Academy of Arts; he has otherwise curated widely, across art, history and science collections, often in collaboration with contemporary artists.

Martin Bailey writes for The Art Newspaper and is also a Van Gogh specialist.